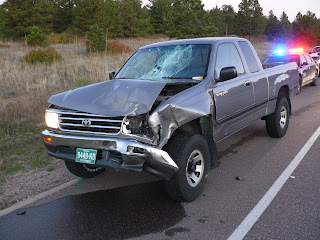 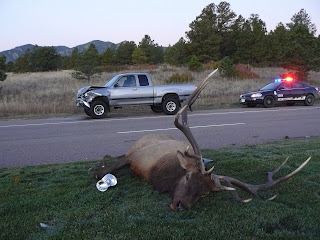 The United States Air Force Academy (USAFA) is just north of Colorado Springs. This is a condensed version of an E-mail I had received and my response:

This huge elk was hit by truck where I work. Darn it.

Forwarded from USAFA Safety - Elk strike photo shows a dead elk so don't open if you don't want to see it.

Good morning Team USAFA,
As the fall season progresses and the weather cools it marks a time of high activity for the wildlife across our 18,000+ acres. This time of year marks the rutting season for both our mule deer and elk populations. These animals are very active during this time and with their hormones raging they will do things out of the norm. I've noticed a significant spike the last two-weeks of deer-strike blotter entries. We even had a bull elk killed after being struck on stadium blvd. Fortunately our member was not harmed however you will see the extensive damage to the vehicle. I've attached two pictures of the incident. Additionally, these animals are much more aggressive during the mating season. If you are out enjoying the scenery USAFA has to offer and come across any deer give them a wide berth. The attached video link shows a little of this aggressiveness. https://afkm.wpafb.af.mil/DocView.asp?DocIDp89553

I ask each of you to remind your folks to keep their eyes out for wildlife on or near the roads. The ever changing weather also adds a higher level of risk for strikes. I had a close call with three mule deer bucks in the fog earlier in the week. Use your high-beam headlights when possible at night, slow down, and use a good visual scan to spot these animals. We want to protect both the animals and our members from injury.

Response: As a professional driver, I have to slightly disagree with the statement you made: "Use your high-beam headlights when possible at night, slow down, and use a good visual scan to spot these animals. "

Yes, use your high-beams while driving, BUT when you spot these animals along the side or on the road, drop the beams to low, and kill the driving lights. You've heard of the expression "Deer in the headlights"? Well, that's what that means. When they're caught in the bright lights of a vehicle, including the driving lights, they will either freeze, or run out in front of you because that's the only area they can see!

Problem is, too, many people have their driving lights hard-wired into their headlights or marker lights and cannot turn them off. OR... don't know where the switch is. So, you may want to convey this tidbit of info to your peeps.

Thank you for the original public service announcement.

And as for the first line of the memo, my response to my friend: “They're ALL huge. The guy is lucky it didn't end up on his lap! The elk I hit with the big truck caused $14K damage!”
Posted by The Short Fat Truck Driver at 2:49 AM No comments: