It's that time again where I have to renew my Drivers License.
Having a Commercial Drivers License (CDL) means that every four (4) years I have to jump through the hoops to get 'er done. It probably wouldn't be so bad if I didn't have the Hazardous Materials (HazMat) endorsement on my license. But, I do, so let the games begin.


First off, I had to go online and register with the Transportation Safety Administration, or TSA. Here is where the fun begins. There are two, count 'em, TWO websites! The olde one and the new one. The olde one is supposed to direct you to the new one, but it doesn't. They ask all kinds of questions and for $86.50 give you the right to then go down to one of three fingerprinting stations in Colorado: Denver, Colorado Springs, and someplace on the Western Slope.


Part of my frustration is the fact that the rules have changed, which the olde website doesn't reflect. Case in point: they require two forms of identification; I chose to use my Drivers License and Birth Certificate. Nowhere in the olde site does it stipulate that on the two forms of ID the name has to be EXACTLY THE SAME. That wasn't an issue four years ago, but it is now.

So after paying my $86.50, I drove my personal vehicle down to Denver to do the fingerprinting. I was denied, because my two forms of ID didn't match, and they advised me of such. So back to Greeley I go to the Department of Revenue to get things corrected. I actually did that a couple of days later because I was so mad!

At the Department of Revenue, I decided that while there, I would also take the HazMat written test. This has to be done to renew said Drivers License also. I missed four; not bad for not having studied! Considering what transpired at the Fingerprinting place, they were somewhat stumped as to how to give me an updated Drivers License with the correct information. It seems that there are a lot of considerations that have to be dealt with to accomplish what I needed done. BUT... They did.

The next day I drove to Denver early with the truck, had a friend pick me up and play chauffer, and got the fingerprinting done. 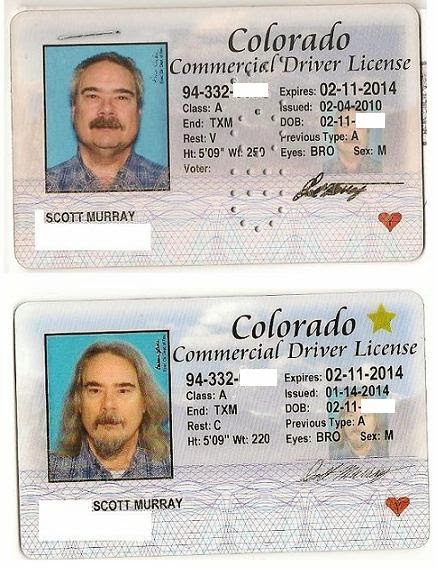 Now I wait for my letter from the TSA that says I'm a good boy. When I get that, I can OFFICIALLY get my Drivers License renewed for another four years.

Considering what I went through, it is no wonder that so many drivers are giving up their HazMat endorsement on their Drivers License. For many, the hassle just isn't worth having it.

Oh yeah! I forgot! I've got hair! There's a story behind it. You want the long version, the short version, or the Reader's Digest version? How about the latter: It's warmer and I can!
Posted by The Short Fat Truck Driver at 12:42 AM 3 comments: