While delivering fuel to our store in Keenesburg I decided to clean my windows. This was somewhat of a daunting task in that I had been up in the mountains earlier in the evening and it had snowed, and CDOT used Magnesium Chloride (Mag) on the roads as a de-icer. Mag is oily and greasy, and very difficult to clean off of windows. Many paper towels later I had somewhat accomplished the task.

Being a conscientious individual, I took my dirty towels over to the dumpster to discard them. For whatever reason something caught my eye and I turned my flashlight on to see what was within.

There, lying amongst the discarded boxes and bags of trash was “Old Glory”. Upon further examination I determined the reason She was in there was because the wooden standard to which She was attached was broken.

To my shame, with all of my American ingenuity, I could not figure out a way to get Her out of that despicable predicament. I could not find a way to climb into the dumpster, and if I did, how would I get back out? I am no longer a “spring chicken”. The tools that I had available could not snag or grab Her to hoist Her out.

Alas, Old Glory was destined to be buried unceremoniously in an unmarked grave.

Today, 9-11 still weighs heavy in my heart. Add to that two major situations this week, the bombing in Boston and the explosion in Waco, and then to see “The abstraction of the Union… that millions of people would fight for, and many thousands die for”, “Old Glory”, so carelessly cast away, grieved me so.

When a flag is so tattered that it can no longer serve as a symbol of the United States of America, it should be destroyed in a dignified manner, preferably by burning. The American Legion and other organizations regularly conduct flag retirement ceremonies, often on Flag Day, June 14. Also, modern nylon or polyester flags should be recycled due to hazardous gases produced when such materials are burned.


Is this what our great country, the United States of America, has become? To not give an iota as to the relevance, the power, the symbolism of Old Glory? To just cast Her away with the daily garbage? Have we finally lost complete and total respect for the oldest and most beloved Veteran of our country that we cannot give Her a proper and respectful send off?

Not knowing how “Old Glory” got into that predicament, I cannot cast stones at anyone. But I will ask any and all that, from this point forward, if you are an American citizen or if you love this country, if there is an American flag that has seen better days, please treat “Old Glory” with respect and have her properly retired.

You wouldn’t want to end up in a dumpster, would you?
Posted by The Short Fat Truck Driver at 4:58 AM No comments:

It started out as an experiment a couple of years ago.  I drive the Colorado High Country on a regular basis as part of my job delivering fuel to mountain locations.  Without getting too carried away with all of the aspects of the job, it can get darned cold at times!  So I decided to let my hair grow out "a bit" for extra insulation.

IT was all well-and-good until one day Bill, another fuel hauler, made a comment about his hair, or the lack thereof, to the effect that "it is what it is".  And so I took his word for it: I decided to let my hair grow, and it would be "what it is".

Sometimes a person gets a vision as to what they think they "should" look like.  I had just such a vision.  Thanks to my Lady Friend, she was able to get a pretty good representation of my vision: 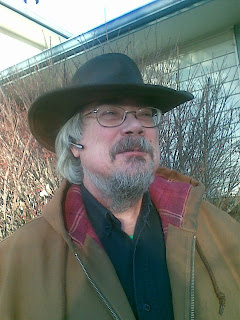 I think I look good!  Coulda done without the Bluetooth in the pic.  My Sister will definitely have something to say about this.

Anyway, I've cleaned up a bit since then.  May wash the coat some day.  It's a work coat and gets grungy quickly, and I don't like to wash it often since it's waterproofed.  As bulky as it is, it's too hard on the dryer.  The hat is leather; standard work fare for me.  Guys at the rack don't recognize me if I don't wear the hat!  It's water proofed and keeps the snow and rain off of my face and from going down my neck.

Real difference between this one and the blog profile pic.  Guess I'll have to update it.

Ok, as my Lady say, "Enough of me talking about me.  How about you talk about me for a while?"!

Until next time, keep the rubber side down.
Posted by The Short Fat Truck Driver at 1:14 AM No comments:

Busy is good, but too busy may not be.  I went to Florida the middle of February and only now am getting around to blogging about it.

Since Mom died last year, I don't need to go to Florida in June to celebrate her birthday any more.  My Sister's and my birthdays are in February, so I decided to split the difference and went between the two dates.

I had purchased the airplane ticket at least two months in advance of going, and had a red-eye flight.  Big mistake.  Long layover in Charlotte.  However, the redeeming part of it all was the fact that there was two(count them, TWO!) major snow storms to hit Colorado and the front range while I was gone.  The first hit the same day I landed in Florida.  Broke my heart!  The sun was shining, the birds were chirping...  Ah, it was almost heaven.

I had forewarned my Sister that she would probably not recognize me.  While waiting for her to pick me up at the Sarasota-Bradenton Airport, I walked across the "road" to chat with a traffic cop that had to keep chasing people out of the no parking zones.  Small airport: the loading/unloading of passengers are the same areas.  So when I saw her driving down the road towards me, I stepped out from the curb and proceeded to wait for her to stop.  She did after she had run me over two or three times.  The look on her face was priceless.

The story of the "new look" will be the next blog, or thereabouts.

She did pick me up, and we had a wonderful week.

Since the Daytona 500 was running that weekend, we decided to go visit my Aunt Audrey first. 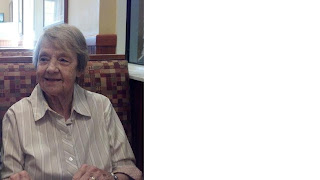 She is 90 years olde and doing very well!

Then, since I had not been to the farthest south-eastern point in the United States, we went on a boat trip to Key West.  The wind in our hair and the sun on our faces left a lasting impression; we both got wind and sun burned!  But it was worth it; I finally got there! 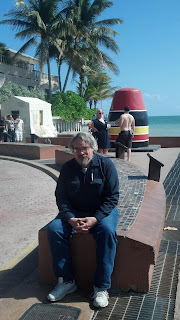 A picture is worth a thousand words!  AND I got to see mile "0" on highway 1: 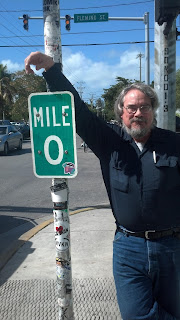 And of course, I ate a lot.  One of my favorites was the Key West Key Lime Pie: 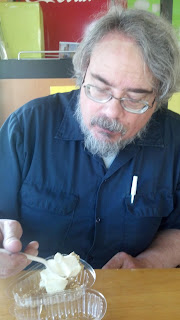 You can just see the sunburn at the hair line where I didn't get any sunscreen.

I want to thank my Sister, Connie, for a wonderful, warm, eventful, relaxing, and fun vacation.  I also accomplished a lot: she let me tinker around her house, fixing things that needed to be fixed.  I so very much miss that, and do really enjoy it!  Hopefully, in a near future blog, I'll be able to report on my being able to sate my 'tinker-itis' here in Greeley.

In the meantime, keep the rubber side down.
Posted by The Short Fat Truck Driver at 12:36 AM 1 comment: